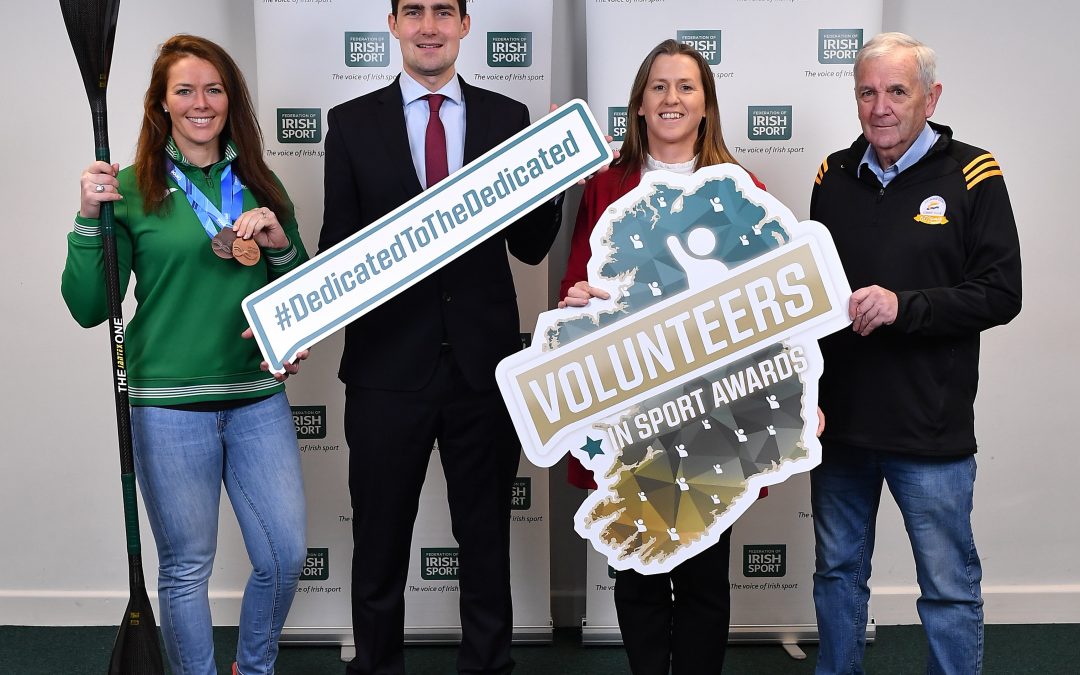 ‘Give the gift of nominating a standout volunteer in your club’

12th December 2022: The Federation of Irish Sport today announced the launch of the 2022 Volunteers in Sports Awards. The county awards will return to an in-person awards ceremony, recognising the army of volunteers who make sport happen in communities, in every county across the country. Nominations are now open at www.volunteersinsport.ie. The awards are #DedicatedtotheDedicated.

The 2022 awards will be celebrated in the Greater Dublin Area at the beginning of March 2023. Nominations are open from Monday 12th December via the dedicated awards website. Entries will close on the 25th January 2023. Nominations received will be shortlisted and put forward for consideration by the Judging Panel. Winners are chosen on a county basis, with 32 award recipients and one overall Outstanding Volunteer Award.

Volunteers are the cornerstone of sporting activities in clubs and communities nationwide. Unpaid, they give freely of their time, energy and are dedicated to the development of their chosen sport. Over 450,000 volunteers are needed on a weekly basis to run club activities, giving on average 3½ hours per week. The estimated economic value of volunteering in sport and physical activity is worth €1.5bn. Without them sports clubs would not exist.
Also present at the launch the of the awards was the 2020 Co. Kildare recipient Tom Egan of Salmon Leap Canoe Club and his daughter Irish Canoeist Jenny Egan a multiple World Championship and European Medallist and Multiple World Cup Medallist and currently ranked World No. 1.

Commenting on the announcement Minister of State for Sport and the Gaeltacht, Jack Chambers, TD said, “It’s an honour to be part of the launch of these national awards, recognising the many volunteers who are the backbone of local sports clubs in every community across the country. They are responsible for making sure weekly training sessions take place, managing teams, organising inter-club matches, ensuring pitches, courts and clubhouses are kept operational most importantly bringing communities together through sport. Last year’s winners represented a wide variety of sports and all ages of volunteers. I
would encourage all club members to reflect on who they know in their club that has made a difference and had a positive impact in their community through their dedication to their sport.”

Mary O’Connor, CEO of the Federation of Irish Sport said, “I am delighted to launch the return of the Volunteers in Sport Industry Awards. While the awards were successfully hosted online for the last two years due to the pandemic, nothing beats the warmth and connectivity of gathering in-person to recognise the selfless work being done by volunteers behind the scenes at clubs and sporting organisations.
There is a strong sense of volunteerism in sport in Ireland. We had been on track to reach the 2027 target of 55% for social participation, club membership or attendance at a sporting event. However, Covid has impacted this and we need to encourage more participation and volunteering to get back on track to reach this target. Shining a light on our volunteers in sport is a way to recognise and remind people of the invaluable role they play in society.”